Thank you so much, Celia

You can't even imagine how many other smiles that will get in Monkole.

Sometimes you think that you have to be older to do great things. But that is false. I introduce you Celia: a few days ago she made her first communion, and instead of asking for mobile phone, or dozens of toys to their family members, she spare a thought for all those children – we talked to you about them, from Monkole, with their weaknesses and, often, with their illnesses.And she decided to say to her family that all she wanted to is giving away all the presents to Monkole, to heal some of those children. And here you can see her: she has managed to raise 1400€ with which we will change the life of at least three children from the Congo, who will be able to smile again. Quoting Teresa of Calcutta: “We ourselves feel that what we are doing is just a drop in the ocean. But the ocean would be less because of that missing drop.”

For the example you’ve set, we tought of ourselves as elder people, but it is you who is great I hope you don’t ever forget the satisfaction and the joy you will feel by helping others. Oh… and congratulations on your first communion you have received the Best of the gifts. We leave here some pictures of the children that we have cured other years. After summer, we will show photos of those we have cured with your donation. 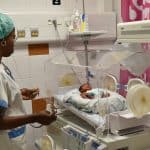 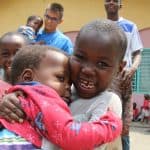